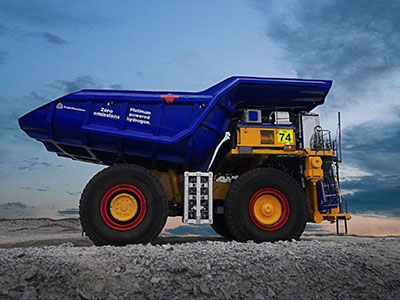 This article was published by Eva McKee on 13 October, 2022

Leading global mining company Anglo American recently launched its nuGen hydrogen haul truck at its Mogalakwena mine in Limpopo. The nuGen, which also happens to be the largest truck of its kind, took two years to build and design. Anglo American is currently devising a plan as to how they can commercialise this beast of a machine.

The company's head of Technology Development, Mining and Sustainability, Julian Soles, explained he had originally broached the idea with multiple OEMs including Hitachi, Komatsu and Caterpillar. Unfortunately, due to Anglo American's strict time restraints, none of the OEMs could give Soles the green light; with a prototype not complete until 2027. This would considerably hinder Anglo American's goal to replace forty of their unsustainable trucks with hydrogen equivalents.

Anglo American have been clear regarding their optimistic and impressive sustainability targets. By 2030, the company aims to reduce absolute greenhouse gas emissions (Scope 1 and 2) by 30% and improve efficiency by 30%; in 2040 they plan to be carbon neutral across all operations and aim to reduce Scope 3 emissions by 50%.

In order to make these goals a reality, Soles switched up his strategy for developing the nuGen truck. Together with US engineering company, First Mode, Anglo American were able to design and built the truck. The nuGen can carry a 290t payload and has an integrated hydrogen solution provided by ENGIE that includes compression, storage, production and refuelling in record time.

Unlike the forty diesel-fuelled trucks that are being replaced, each of the nuGens won't rely on fossil fuel. Instead, the project will see a solar plant-powered hydrogen electrolyser split water and supply the trucks with hydrogen fuel, resulting in the production of zero carbon emissions throughout this manufacturing process.

Soles said, "People told us three years ago this is not going to happen, this is not a good idea. They are now beginning to take real notice... The vision for us is to see this rolled out across our business and the mining industry. It's Anglo's choice whether to commercialise this."

With 10-15% of the company's total Scope 1 emissions being generated by their haul truck fleets and 80% of diesel emissions at open pit mines being produced by haul trucks, Anglo American's seemingly impossible creation is set to be a huge player in the decarbonisation of the industry.

This article was originally published by the Components Only team in the October 2022 issue of "@ The Coal Face" magazine.

Components Only is a global leader in the trade of heavy earthmoving components. Our team support users of equipment found in mining, earthmoving and construction, providing them the ability to buy, sell and source new, used, rebuilt and non-genuine components.
Read more /